A former employee at tech giant Apple, Dhirendra Prasad, has pleaded guilty to conspiracy to commit fraud after admitting to defrauding the company of over $17 million. Prasad, who was a buyer in Apple’s Global Service supply chain, was responsible for purchasing parts and services from vendors. Starting in 2011, he began accepting kickbacks, inflating invoices, stealing parts, and causing Apple to pay for items and services that were never received.

Prasad worked with two Apple vendors who have also admitted to their involvement in the fraud. In one instance, Prasad shipped motherboards from Apple’s inventory to one vendor so they could harvest the components and sell them back to Apple. In other instances, Prasad sent components from an Apple warehouse to another vendor, who repackaged and resold them to Apple.

In addition to defrauding Apple, Prasad also engaged in tax fraud by funneling illicit payments from one vendor directly to his creditors. He also created a shell company that issued fake invoices to one of the vendors in order to conceal illicit payments and allow the vendor to claim hundreds of thousands of dollars in false tax deductions, resulting in a loss of over $1.8 million for the IRS.

As a result of his actions, Prasad has been ordered to forfeit $5 million in property and cash and faces up to 20 years in prison as well as restitution. 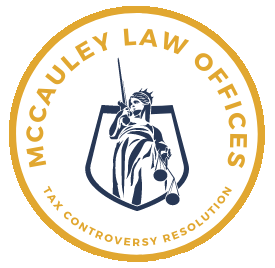 McCauley Law is in the business of settling tax disputes, in fact, it’s our only business! When the IRS knocks, let us answer for you. We handle cases with the IRS all over America day in and day out, and we are good at it. Our dedicated attorneys and staff are here to negotiate the best possible outcome for you and to ensure you are set up to move forward in good standing with the IRS. Contact us for a risk free, no obligation consultation. We will review your current Tax Jam and walk you through our steps to help.