William Britt, a former Georgia city councilman, was sentenced to 33 months in prison for failing to report income from several bars he co-owned near university campuses.

As part of the scheme, each bar was nominally owned by an individual, but in reality, all the bars were owned by a group of partners who skimmed cash from the bars, distributed it amongst themselves based on their ownership percentages, and never reported any of the income on their tax returns.

To throw off the IRS, Britt had the nominee owners file false tax returns and gave erroneous information to his accountant. He underreported the bars’ income and omitted cash distributions to the owners. By the time Britt’s house was raided by the IRS he and his partners had been under investigation for more than a year.

In addition to the prison sentence Britt was ordered to pay $352,404.54 in restitution to the IRS. His partners are awaiting trial.

McCauley Law Offices is here for you, we can help you out of your Tax Jam and get the IRS off your back for good! Contact us for a FREE consultation.

Former pastor of Emmanuel Baptist Church in Atlanta, and City of Atlanta Director of Human Services, Mitzi Bickers, was sentenced to 14 years in prison for accepting approximately $3 million in bribes, money laundering, and failing to disclose more than $600,000 in income on her tax return.

Bickers sold critical information to two businessmen which enabled them to secure contracts with the city for emergency snow removal, sidewalk repair and maintenance, and bridge reconstruction, totaling more than 15 million dollars. In addition to charging for the information up front, Bickers also had the men inflate their invoices to the city so they could give her kickbacks once they were paid.

In 2011 Bickers reported $58,896 in income on her tax return and received a refund of $3,924. That same year she received $600,000 in bribes and owed the IRS more than $200,000. The proceeds from the fraud scheme enabled Bickers to lead a lavish lifestyle that included purchasing a luxury SUV, jet skis, and a lakefront home, all of which she has been ordered to forfeit.

In addition to the prison sentence Bickers has been ordered to pay $2,955,106 in restitution to the City of Atlanta. She is currently appealing the court’s decision.

McCauley Law Offices is here for you, we can help you out of your Tax Jam and get the IRS off of your back. Contact us for a FREE consultation today! 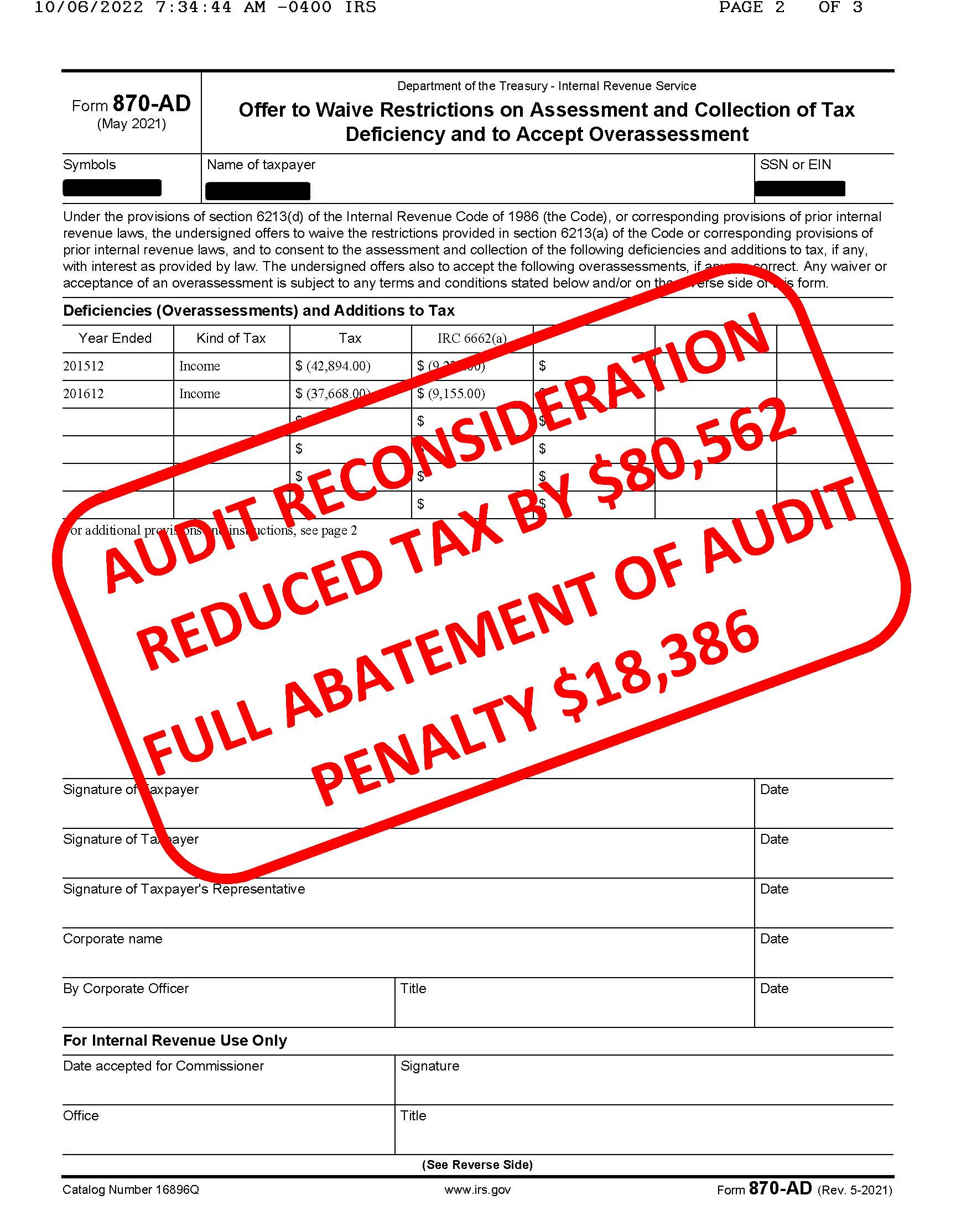 The IRS can be quite unforgiving when auditing a taxpayer, especially in instances in which the taxpayer is unable to fully substantiate their business expenses.

We often receive calls from taxpayers who did not receive zealous advocacy through their tax preparer and ultimately end up owing the IRS significantly more than they should. In this instance, the taxpayer was working with their accountant throughout an audit of their personal and business finances when the IRS assessed almost $100,000 in additional tax over a two-year period.  The client approached us and upon review of the taxpayer’s documents and records, we quickly determined that the IRS had erred in their examination and the amount assessed by the IRS was incorrect.

Upon completion of an audit, the taxpayer has the right to file an appeal or pursue a tax court petition to challenge the tax assessment. If neither of these paths are taken, the only recourse to reduce the total tax assessment is to purse audit reconsideration, as was the case with our client! This can be a long and extended process as the petition must first go back to the original auditor and, in most instances, the original auditor is not willing to adjust their assessment. In this case, and those similar, an appeal can be filed. After much negotiating, we were able to reduce the total tax assessment by $80,562. In addition, we convinced the appeals officer that she should also reduce the penalties that were assessed in the audit, which resulted in a full abatement of the accuracy penalties to the tune of $18,386.

If you were audited by the IRS and believe that they erred in the additional tax assessment, contact our office so that we can help determine what your best options are moving forward.

Glen Zinszer, founder of the self-proclaimed “Facebook for Business” Brazzlebox,  was sentenced to 51 months in prison for committing wire fraud and filing false tax returns.

For years, Zinszer lied to investors about how well Brazzlebox was doing by inflating the company’s user numbers, having employees create fake user accounts, creating false revenue generating partnerships, and forging a letter of intent to purchase Brazzlebox for millions of dollars.

From 2012 to 2016, Zinszer used the bulk of the money invested to pay for personal items, including mortgages on his homes, concert tickets and jewelry. From 2013 to 2016 he also underreported his income on his federal tax forms.

McCauley Law Offices can help you out of your Tax Jam! Give us a call for a FREE consultation. When the IRS knocks, let us answer.

The owners of the Yoga to the People chain were stealing tax money from We the People, and were arressted for failing to file tax returns from 2013-2020. Gregory Gumucio, Michael Anderson, and Haven Soliman started the donation based yoga studio in Manhattan in 2006, and ultimately had 20 locations around the country.

Court records show that the studios generated more than 20 million dollars in income, but despite the company’s success, they never filed a corporate tax return. The men hid the company’s income by paying employees in cash, refusing to provide employees with tax documentation, not maintaining books and records, paying personal expenses from business accounts, and using nominees to disguise their connection to various entities. They were known to have “stacking parties” where they would get together to count the cash stacked in one of their apartments.

They each face a maximum prison sentence of 30 years, plus restitution.

McCauley Law Offices has experience with criminal and civil tax controversy resolution. We deal with the IRS so you don’t have to! Contact us for a free consultation and let us help you out of your Tax Jam! 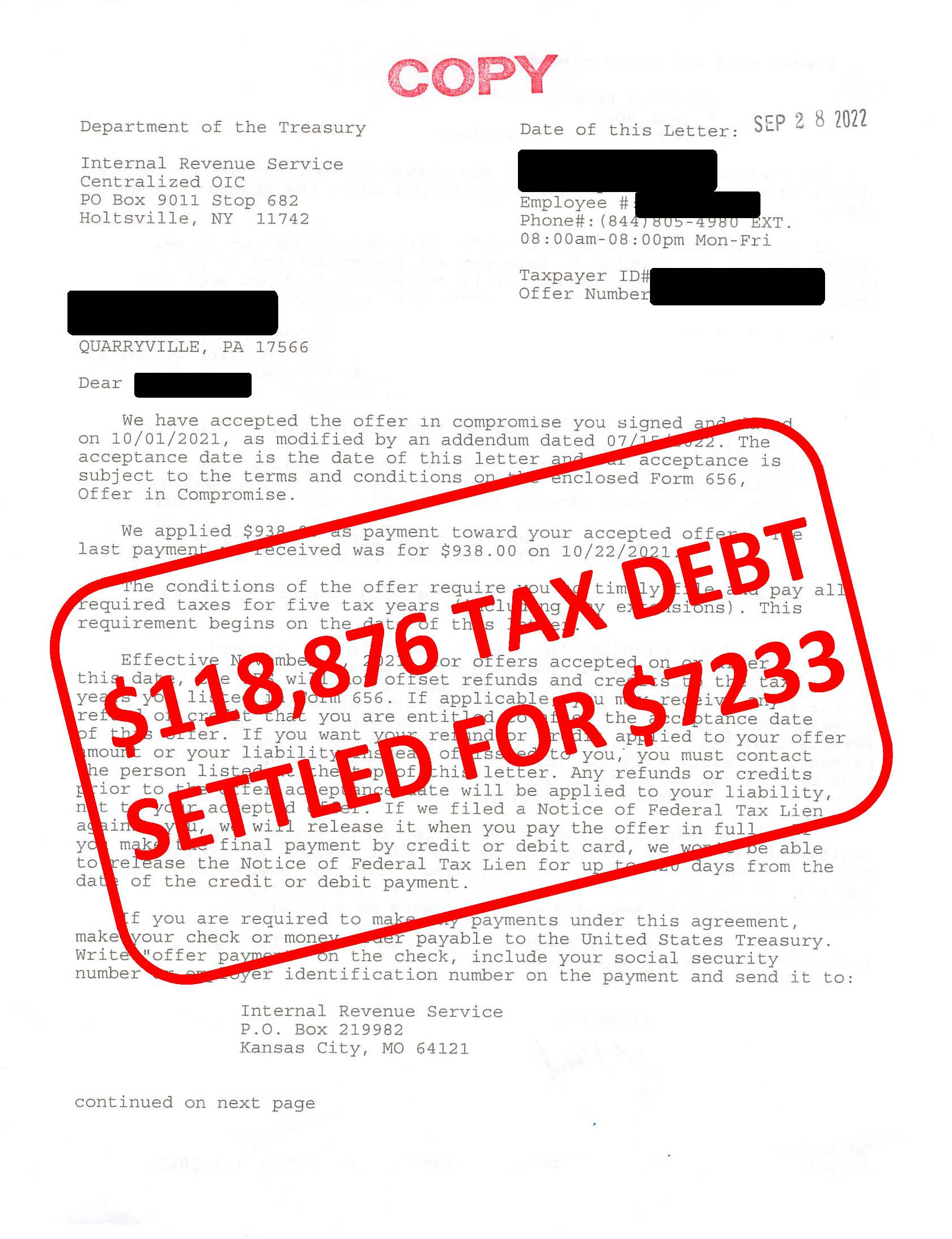 Former stockbroker Robert Cirillo was sentenced to 78 months in prison for filing false tax returns and running a securities fraud scheme. Cirillo targeted low-income Hispanic victims via false promises of high returns from construction loans. Cirillo never invested any of the money, and instead used it for personal credit card expenses, trips, a Jeep, and an Alfa Romeo. From 2015 to 2017, Cirillo failed to report more than three million dollars in income on his tax returns, causing the IRS a loss of $676,898. In addition to the prison sentence, Cirillo was ordered to pay $3,948,835 in restitution to his victims and $676,898 to the IRS.

McCauley Law Offices can help you out of your Tax Jam, contact us today for a completely free consultation and learn how we can help you! When the IRS knocks, let us answer.

Carrie Leigh Long, the accountant for a company that makes luxury limousines and buses, was sentenced for embezzling $362,000 and failing to pay over more than $1 million in payroll and personal taxes. Long stole a total of 198 times between 2016 and 2019, using a stock of pre-signed checks to pay herself unauthorized amounts and also forged checks made out to herself. She did not claim any of the stolen money on her tax returns, causing the IRS a loss of $65,039.

Beginning in 2019, Long stopped paying payroll taxes, both the ones owed by her employer and the ones collected from employee salaries. She failed to pay $902,226 in payroll taxes, which gave her a bigger pool of money to steal from. Long was on probation while pursuing this scheme, for embezzling $88,000 from a client of her previous employer. In that case her mother paid the victim back the $88,000. Long used some of the newly embezzled funds to pay her mother back.

McCauley Law Offices can help you settle your Tax Jam, contact us for a free consultation today!

Michael Sorrentino, better known as “The Situation,” is an American reality television personality who skyrocketed to fame after appearing on MTV’s hit show Jersey Shore from 2009 through 2012. In 2010 alone Sorrentino made a whopping $5 million, the second highest of any other reality star after the queen of reality TV, Kim Kardashian. The Situation had endorsement deals and guest appearances on a number of shows, he even went on to have spots on ABC’s Dancing with the Stars, and CBS’s Celebrity Big Brother. Its safe to say that Mike Sorrentino was on top of his game, living the high life and hob-knobbing with the who’s who of Hollywood. What could go wrong?

In September of 2014, Mike Sorrentino was charged by the IRS with tax fraud for his failure to pay taxes on $8.9 million dollars of income. Sorrentino, along with his brother Marc, established a company called S Corporations which they used to pay for personal expenses and failed to report income. In 2017 even more charges were filed against the Sorrentino brothers, alleging tax evasion and structuring of bank deposits to evade reporting thresholds.

Sorrentino entered a plea deal with prosecutors whereby he pleaded guilty to one count of tax evasion. The Situation was sentenced to eight months in prison, followed by two years of supervised probation to begin after his release, and was ordered to perform 500 hours of community service. Ultimately, the star ended up serving just shy of seven months in the slammer in 2019. Now, that’s a situation.

McCauley Law Offices can help you with your tax situation, or Tax Jam as we like to call it. We work with taxpayers and the IRS every day to ensure our clients are receiving the best possible deals. When the IRS comes knocks, let us answer. Contact us today for a FREE consultation!

From 2014 to 2017 Henderson wrote 118 checks to herself from the organization’s bank account and deposited the funds into her personal account. The embezzlement included an elaborate, fake audit to cover up the theft, along with fabricated emails and websites and at least one other person she paid to impersonate an auditor. She stole $291,385.23 and failed to report any of the funds on her tax returns.

Had the non-profit done a background check before hiring Henderson they would have discovered that in 1997 she pleaded guilty to felony bank fraud and was sentenced to one month in prison, five years of supervised release and ordered to pay $133,614 in restitution.